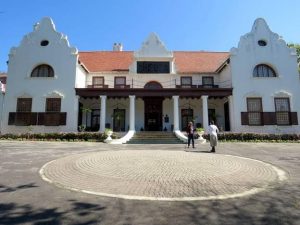 Groote Schuur, Dutch for “big barn”, is an estate on the Rondebosch side of Newlands. In fact, Newlands Avenue used to run right through the property and when next you drive up Klipper Road, look out for the “Newlands Avenue” road sign which is still displayed at the entrance of Groote Schuur.

In 1657, the estate spanned 65 hectares and was owned by the Dutch East India Company. The house, which was originally a granary for the farm, was constructed in the seventeenth century. Cecil John Rhodes took out a lease on the house in 1891, then bought it two years later for £60,000.

The top storey of the Cape Dutch building on the slopes of Devil’s Peak was destroyed by fire in 1896. The traditional thatched roof was replaced by sturdier Welsh slates.

Rhodes commissioned the architect Sir Herbert Baker to renovate the house, and although he gave Baker no strict instructions as to what he wanted, he abhorred any mechanically-made items (such as hinges for windows) in the house and had them replaced with brass and bronze items that would be cast.

Baker remodelled the front of the house, added a long stoep in the back and constructed a new wing. The wing contained a billiard room with master bedroom above that boasted a large bay window overlooking Devil’s Peak. He also added a grand hall with a massive fireplace.

The home’s hybrid of ornate gables, colonnaded verandas, barley-sugar chimneys, whitewashed walls and warm teak woodwork give it a regal appearance. The original and only bathroom during Rhodes’ time has a massive bathtub carved from a single piece of Paarl rock granite. No-one is sure how it was brought all the way to Rondebosch or how they lifted it upstairs

Baker also played a significant role in the furnishing of the house. After initially filling it with modern furniture from London, Rhodes, influenced by Baker, began a shift to more traditional Cape furniture. This would mark the beginning of his collection of colonial furnishings.

Rhodes also commissioned agents to search for furniture, books, porcelain, silver and glassware from the Cape. Many of these items had to be re-imported from Holland and today the house and its interior remain almost exactly as they were then.

The rooms in the home have a comfortable domesticity, enlivened by evidence of Rhodes’ eclectic tastes. The wooden comer posts on one of the staircases are carved in the form of the enigmatic soapstone eagles that were found at the Zimbabwe Ruins; Delft tiles decorate the downstairs skirtings; and several of the fireplaces have Zimbabwe soapstone surrounds. 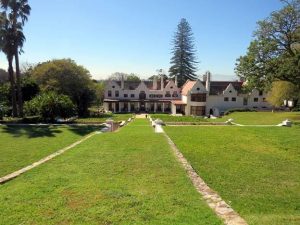 Among the most interesting items in the home are souvenirs from Rhodes’ travels, including an exquisitely inlaid Moorish Egyptian travelling writing table, an old Cape stinkwood armoire with secret drawers and an elephant-shaped drinking cup.

The gardens of the house were as Rhodes demanded – “masses of colour”. He was allergic to pollen so the plants were carefully chosen and the house was surrounded by a mixture of hydrangeas, cannas and his favourite flower, the starry blue Plumbago.

Rhodes was always a generous host while at Groote Schuur. He used the residence as much as a business and political headquarters as a home. His life at the time was one of dinner parties and meetings on the stoep, where he would be joined by as many as 50 people at a single gathering.

Cecil John Rhodes died young, at age 48, and bequeathed Groot Schuur to the nation along with vast tracts of mountainside that stretched all the way to Constantia Nek. Much of it has been spared development and is now an important conservation area, including Kirstenbosch Botanical Gardens. Part of the estate became the upper campus of the University of Cape Town.

From 1910 to 1984, it was the official Cape residence of the Prime Ministers of South Africa and continued as a residence of PW Botha and FW De Klerk. However, Botha never resided there, opting rather to live in the neighbouring Genadendal building (formerly called Westbrooke).

The building was the site for the signing of the historic “Groote Schuur Minute” between Nelson Mandela of the African National Congress and then-president De Klerk, on 4 May 1990. The document was a commitment between the two parties to the resolution of the existing climate of violence and intimidation as well as a commitment to stability and to a peaceful process of negotiations.